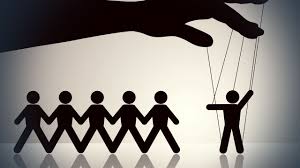 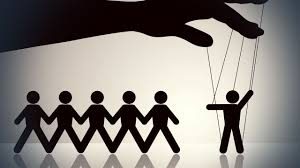 Triangulation is a narcissist’s indirect form of communication where one person (the narcissist) acts as a conduit to prevent direct contact between two or more people.   It can be used as a way to draw a third party/parties to gang up on their chosen target to benefit their own agenda, as a way to keep secrets, to make individuals suspicious of each other by making false claims about what the other said about them, gas light or to blame others for unpleasant things that they did or said about a victim of their abuse

It is employed by the narcissist specifically to control, dominate, demote and hurt their targets.  Those targets can be anyone they come in contact with ranging from their children, partners, friends, co-workers and other family members.  It is a predatorily tactic and is done by exploiting other people’s vulnerabilities and trust.

If you come from a narcissistic family of origin your parent(s) will have almost certainly used this technique as a means to control and frighten their children.  As every politician knows, frightened people are easier to control than confident ones, a child who comes from a family like this knows that absolute obedience is the safest way of survival, as a small child’s life is at stake if the parent threatens to abandon or hurt them.

The most popular way that narcissistic parents control their children is by splitting/dividing and conquering this involves pitching the siblings against each other so that they don’t trust one another and find it difficult to be in one another’s company.  It is done for two reasons:

Once the narcissists achieves this goal, all trust will be lost between siblings.

They will do a character assassination on anyone who poses a threat, disagrees with them or dares to disobey them.  They will often invent cruel comments and attribute them to other people to further hurt and lower the self-esteem of their victims. When they have created this dysfunctional non direct communication between the people around them, they can play a pivotal role in the control of information that is supplied within the family unit, group of friends, work colleagues or clubs, filtering and censoring the flow of information to fit their own agenda.  Since most people are unaware of the concept of this deliberate feed of misinformation by narcissists they frequently believe the lies that they are told, they trust their and since they have not had any experience of such deliberate deception.  Narcissists are pathological liars so they will lie about tiny/unimportant things at first to see if they “get away with it” and if they do, like a small child, they will just push the boundaries further the next time.  If they get pulled up on a lie, they will make a petty excuse and realise that it will be too much trouble for them to convince their target of their lies and will move on to the next source of supply.  Children of narcissists will have only had experience of this type of “communication” so it will feel normal that no one talks directly to each other and that they are always told what other siblings/parent or people said about them.  Narcissists do not talk to people they talk at them with the specific goal of control/power.

That is not where the dysfunctionality of triangulation stops.  The narcissist will not talk openly and frankly with anyone including their children as they do not want that level of intimacy or indeed to have their projected image damaged/questioned in any way.  Instead the narcissist will ask one person about another.  So they will say “what is X up to these days”, “Y seemed upset at dinner the other night, what is going on with them”.  To get people to open up to them they will trade other people’s secrets or will invent something unkind that “someone else” said about them to provoke a reaction. This indirect form of communication leaves it wide open for people to shaft each other and create disharmony with in a family or a group as it isolates each individual and increases the levels of insecurity and lack of trust between family members, friends, colleagues etc.  Which in turn makes it much easier for the narcissist to control the people around them.

Another form of triangulation used by narcissists is to be immensely impressed by the success of other people in a specific field – real or imaginary.  They will compare the accomplishments/talents of others and will imply that the person who they are targeting is substandard.  They will do this by undermining the other person by saying things like “of course you dropped out of college”, “it is a shame that your business venture failed”, “well of course you have been divorced twice”, “of course you cannot have children so you wouldn’t know” they will aim to shame their target (including their own children) with the things that they know they feel insecure about. They will imply that just about everyone they know is superior to you and that you will never be able to measure up to (because if you achieve something, that achievement will be dismissed as unimportant and the bar will be raised higher). Even if the target the performance of others is exaggerated/fictional the implications are not lost on you, there is a clear and unambiguous message that simply says “you are not good enough (try harder to please me”, “you are substandard (I am such a good and interesting person to put up with you who are flop as a person”.

This technique is employed by adult narcissists to control their partners and they do it to a pathological level to feed the needs of their disordered agenda.  Any new relationship with a narcissist will start with love bombing.  It doesn’t make any difference how confident you are at the beginning of the relationship the constant attention, flattery and faux declarations of love will blow your mind (literally), you were manipulated into falling in “love” with them and being in “love” with them makes us vulnerable to them and we trust them.

Once they have you hooked they will start slowly with the abuse with a gentle drip drip of deceit, betrayal, disparagement and rage all done with the aim of destroying us.  Because hurting others makes them feel good and more powerful.  They do this by bringing in a third party, this could be constant reference to an ex-lover, the implication that they are having an affair, talking-up the people who you know in common/work colleauges and being disparaging about everything that you do, or simply by spending too much time on a hobby that they exclude you from.

Another way that they use triangulation is to punish or treat a third party badly.  This is done explicitly to let you know that if you do not conform to their control, they will do exactly the same to you.  It can be in the form of making an “example” of someone such as a child or a co-worker and insist that the others bear witness or it can be in the form of openly going on a smear campaign on someone to let others know that if they step out of line the same thing could happen to them.

There is another way in which narcissists use triangulation and it is what I call the Triple Whammy (which means a situation that is bad in three different ways: a situation in which three bad conditions exist at the same time or three bad things happen one after another).

For example, a narcissist could tell their partner that a member of their family, a friend or acquaintance made an incredibly cruel comment about them, the partner will reel with shock, hurt and surprise because they always thought that they had a good relationship with that person.  The narcissist will then expand on the story and say how they jumped to the defence of their partner denying the validity of everything that the “wicked” other person said about them.  The result for the narcissist is 1) delighted by the hurt inflicted on their partner, 2) look like they are a protective, loyal and honourable partner 3) they will also make you think that the people closest to you are talking behind your back and this will be presented as concern about the authenticity of the relationships that you have with these people and as such wedge a gap between you and the people that are closest to you, they will display faux concern about your well-being and so their language will be couched in unchallengeable caring terminology.  It is designed to destroy you and your relationships, to isolate so that they can garner more control.

A final thing that is alarming if you are in an adult relationship with a narcissist is that the narcissist can threaten to “tell Mummy on you” if you don’t do what they say (seriously!).   This is a result of a narcissistic mother who has over cossetted her child, so s/he always considers her his “go to place” when anything goes wrong.  The threat of “telling Mummy” usually comes in the throws of a narcissistic rage when the have completely lost control over themselves, it is however, always difficult to believe that you just heard that comment from an adult.  Basically if you are in a “relationship” with a narcissist you have just been calculatedly manipulated into a baby sitting role and that is why they feel justified in telling Mummy if the “hired help” isn’t doing his or her job properly.