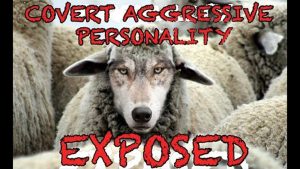 They are extremely judgmental of others.  This is because they have so many insecurities they are hyper critical of those around them.  Their criticism of others bears absolutely no relation to reality, if fact, the more threatened they are of the positive attributes of a person, the more critical they will be and the more inclined they will be “to bring them down a peg”.

They are usually charming to the person’s face and viscous about them behind their back. They are quite capable of all sweetness and light and make horrible comments under their breath as they walk away. That charm will be increased when they want something from a person.  This can include material goods, money and status.  There is absolutely nothing authentic about their relationships with others.

Their motto is “attack is the best method of defense”, so no matter what happens nothing is ever their fault.  This denial of responsibility refers to everything from taking a wrong turn in traffic, a failed relationships, abusive behaviour or even a badly cooked meal. They will project every potential negative feeling about themselves on to someone or something else.  A classic comment from a covert narcissist is “now look what you made me do”.  Their arguments are so illogical and so repetitive that there is no point in giving a counter argument.

You will never have a more isolated or lonely “relationship” than that with a covert narcissist.  They may act like part of a couple but every now and then they will drop a comment that makes you think “they have absolutely no idea who I am”.  They will also constantly tell you “who you are” and “who they are”, they never let actions speak for themselves, they always accompany their behaviour (and yours) with a narrative that paints them as nothing less that flawless and is designed to devalue you, they will often feign pity for you for being so substandard and imply that you are very lucky to have them because not many people would tolerate such an imperfect partner/ friend like you.

Covert narcissists are completely amoral and without conscience or remorse.  They objectify other people and they only see them in terms of what they can harvest out of another for their own gain.  They do not care if they suck someone dry, they will merely cast them aside and go on the hunt for a better resource of attention, money or status.  When a narcissist cheats, lies or abuses another person they see it as a “hit, a point or a score”, it makes them feel powerful and in control.

Narcissists are extremely condescending and they need to be like this because they have to feel superior at all times.  It is as though they think that if they “permit” the freedom of expression of others in their presence that they will completely and disappear.  Because like all bullies they are weak and cowards, so they have a tendency to negate, devalue and disregard the thoughts/opinions and feelings of others almost out of a fear that they will be over shadowed. However, if you listen to the content of what they say, there are no core values/beliefs and their opinions change depending on who is in front of them and how much they think they can “impress”.

They are the people who can walk over someone who is obviously in distress/dying on a busy street and will get annoyed with them for “being in their way” (unless of course there is an audience in which case they will be the epitome of “compassion”). They despise it when people talk about their illness or misfortune but expect 100% attention/empathy when they are talking about themselves.

Their emotional/self-awareness and interpersonal/social skills are extremely low. They also have absolutely no capacity for logic (which is directly related to their inability to take personal responsibility for anything – including things that they say themselves), it is for this reason that you can never have an authentic connection.

The saying goes “if you are looking for offense, you will always find it” and so it is with narcissists.  Their radar is constantly in search of possible slights on their character. Like all highly critical people they are extremely sensitive to even the mere hint of anything other than an accolade. This could include not being at home when they called by (naughty you, you should have known), to laughing at yourself (which they will see as an indirect attack on them).  Everything that happens around them, they revert back to themselves.  For example, if you go on holiday somewhere nice and have a great time, they will see that as you doing it on purpose “to rub their nose in it” because they couldn’t get time off work/spent their money on an extension of their house.  Either way you went on your holiday specifically to insult or make them jealous.  They literally cannot understand that you might have booked your holiday without them in mind.

If they know that you want/would like something from them, they will deliberately withhold it from you because they would see that as you taking advantage of them and that is their job not yours!  This could be anything from old clothes that they are discarding that you admired, a lift to the airport to someone to listen to a problem you are having. The answer will always be “NO” unless there is something in it for them.

They are extremely envious of others (to a pathological extent), they will try to hide it but they will also try to get some of what you have from you.  Even if they have much more for example in material wealth, they will still try to take from those who are less affluent.  This is linked to the fact that they cannot feel gratitude for what they have and are always looking for more even if it means cheating, stealing or lying.

The covert narcissist constantly needs low level attention, they don’t necessarily want to be a pop star but they do expect to be the centre of attention in all of their other relationships, they will constantly charm new people and utterly ignore those who they think that they “have”. 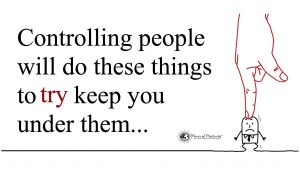 Controlling people are very keen on telling others who they are, what they are, what they are thinking and the motivation behind their actions.  They will deliver their “insights” with such “authority” that you will feel that you have to defend yourself.  No one has the “right” to define someone else, most people do not know themselves very well never mind somebody else.  It is a complete and absolute violation of boundaries and one of the narcissists favourite means of control.  The narcissist will believe their own fantasy world and think that what they are saying/doing is actually right or constructive.  They will justify their actions by saying/thinking “well someone had to tell him/her, I was the only one who had the courage to do it!”

Control is a really destructive problem in any relationship whether it is romantic, friendship, professional or familial. When people try to control others they are attempting to define that person according to what they want/need them to be.  They cannot see that the other person exists and a sentient being that exists in their own right, they don’t respect you for who you are and it can be done in many ways such as:

The problem with recognizing controlling people is that a lot of their control is very subtle and we tend to see their comments as bad taste, we think that we must have missed something when they lie (because they are absolute masters at inventing lies on the spot) or accuse ourselves of being paranoid when people’s behaviour changes as a result of a smear campaign.

Controlling people will always play the victim if they are pulled up on their behaviour.  They will say things like “I was only trying to be helpful, you are so ungrateful”  or “you always misunderstand what other people are saying” (universal miscomprehension – how could they possibly know this?) or “do you always have to be so negative, you are not always right you know”.

When a person has good intentions (in general) it is hard to imagine the motivation behind a controllers behaviour because the big question is “why would anyone want to do that?”, the best “reason” that I have come across is because they are essentially very weak personalities and they think that if anyone else shines that they will disappear completely. Everything that happens around them they relate back to themselves, so for example a child could get sick at a time when a narcissistic parent wanted to go on a weekend break and the narcissist will think that the child did it on purpose to ruin their holiday, a puppy could chew up their favourite pair of shoes and the narcissist will think that the puppy “knew they were my favourite (and did it on purpose)).

It is possible to break free from the spell binding dominance of a controller and this is done by standing back and taking a long hard look at their actions, not their words.  The disparity between their actions and words is also a controlling tactic. When you see the pattern, there is absolutely no point in addressing it with them because they will deny everything and project their bad behaviour back on to you.  What needs to be done is to move out of their presence as much as possible, create relationships with other people who will support your reality and to learn (or relearn) to trust yourself and your intuition/gut feelings again.