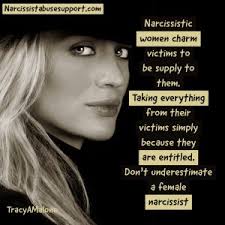 Female narcissists are dangerous because their manipulation is frequently not recognised for what it is.  Manipulation can come in many forms but what is always present in any narcissist is their absolute lack of empathy, their tendency to manipulate for their own gain, total self-obsession, emotionally unevolved and a complete disregard for the rights and feelings of others.

Morality for a narcissist is how they expect others to behave towards them, they are exempt from any moral restraints in their dealings with others (or so they think).  Frequently after they have been destructive towards someone else, they will blame the person they abused rather show any remorse.  They are frequently sadistic and take pleasure in the pain that they can inflict on others, it makes them feel powerful, they experience positive feelings when seeing sad faces.

Because society in general shuns aggression in females, narcissistic females tend to be covert in their abuse of others usually in the form of passive aggression.  So they will be socially abusive by sabotaging someone’s reputation or by destroying relationships through triangulation and deceit.  They will start rumours, make up blatant lies and couch them in faux concern  “I am so worried about Mary she is taking too many drugs/is an alcoholic/is mentally very unstable”  It doesn’t matter what Mary is being accused of the comment is made exclusively to damage her reputation while maintaining the look of a concerned “friend”.

When a female narcissist first meets you she will harvest as much information about you as possible, she will pretend to have the same experiences as you, the same interests, she will be friendly and inviting on the outside but on the inside she is as cold as ice, vindictive and ruthless she is merely scanning you to see how useful you could be to her and how easy you would be to dupe.  All the information that she has gained about you will be used against you at a further date.

Once you have completely let down your guard she will start to use you for whatever you have to offer exclusively for her own gain it could be money, contacts, a place to live (no one falls in love faster than a narcissist who needs a place to live), status, fame or just for the pleasure of scoring points against you, everything to do with a narcissist female or male is all about power and control.

The female narcissist is constantly on the prowl for prey so when she looks at you she is not connecting she is assessing what is in you for her.  She has a cold stare she can gesticulate, do funny accents but it will never feel authentic. Sometimes you will see signs of envy, jealousy, anger or greed when she is caught off guard.  What will expose her is that she thinks that being condescending and disrespectful if used in a jokey manner is humour, it is not, it is just abusive and rude.  In society we do not see women as being violent like males, which is why so much of the destructive behaviour of these narcissists goes undetected but they are every bit as dangerous and cruel.  Possibly more so because we do not expect it from the “fairer sex” plus they use sexual intercourse as a tool to get what they want which can be extremely confusing for the person being targeted.The female narcissist is extremely aggressive and that aggression is frequently driven by envy.  They can appear to be affable and can change colour according to the social situation they are in.  In short they will change according to what they think will serve them best. However, if they do not deem you worthy of their attention, they will not bother with the show and you will see a truer version of them.  The female narcissist will never let her mask drop entirely just in case circumstances change and she needs to use you in the future.

Most of a female narcissist’s destructive behaviour comes in the form of relational aggression which means that they go in for character assassination and destroying relationships between people. They will constantly try to make others (and in particular other females) subordinate to them so that they are queen bee in as many situation as they can muster.  This includes family, work and social situations.

All female narcissists are bullies and like all bullies they are cowards as well, so they will be very underhanded in the way that they bully.  Such as excluding their victim from social situations (by not inviting them, giving misinformation, down-playing the importance of a meeting, “forgetting” to inform and so forth), they can also spread rumours and gossip and will try to pit people against each other, breaking bonds of trust through pathological lying.

Anyone who gets in the way of a female narcissist is fair game.  They think that they are entitled to everything and are threatened by other women (in particular but not exclusively) who have qualities and things that they cannot have.  They inherently despise other women as an internalized misogyny.  She will declare other women are stupid, she will sneer at their dress sense, partners job and anything at all that belittles the woman/women who pose a threat to this narcissist and their sense of grandiosity and entitlement. With a female narcissist absolutely everything is about her, to the point of being ridiculous.  For example, she could consider that someone bought a piece of nice piece of clothing just to make her look bad, or celebrate a promotion at work with friends just to belittle the narcissist.  What the female narcissist doesn’t realise is that people live their own lives without thinking about what they do might affect the narcissist. If a female narcissist cannot make a situation about them, she will ruin the occasion for the person who is celebrating, usually through drama, by sometimes feigning illness or some other form of attention seeking.  If she cannot bring the focus on to her, she might leave in a massive sulk leaving everyone wondering what was wrong with her.  This is still attention for the narcissist because people are still thinking/talking about her.

They love to see people feel uncomfortable, they renege on promises so that they can see someone’s disappointment or invite someone to something and not follow through.  Female narcissists are not beyond pretending that they are friends with the rich and famous, even though they might never have met any of them. The implication being “aren’t you lucky that I am spending time with little boring old you when I know people who are so much more important”.  They will praise a third party in a way that it implies that the person that they are belittling is in some way defective by comparison.

A female narcissist will always be in competition with other women for the attention of the men around (if that is their sexual inclination).  They have no qualms about using their bodies to get what they want no matter what the situation, so long as it suits their wants in the moment, they will do it. Their appetite for new conquests is endless as well as keeping exes in the picture while being in a “steady” relationship.  They keep all of these relationships going concurrently through deceit and by lying constantly.  Nothing about a female narcissist is authentic or honest, they are very dangerous people to be around because they do not operate like “normal” people. They are essentially dead inside so they have no idea what it means or feels like to be a human.  Just remember if a narcissist has abused you it is not your fault.  You took them in good faith.  They betrayed your trust, but that is because they are very disordered people with no moral compass and no scruples.  That is not you it is them.