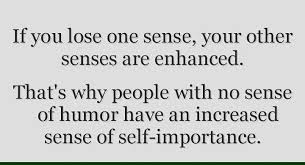 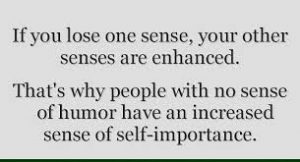 Narcissists have a very poor sense of humour especially when it comes to themselves.  They take themselves extremely seriously and expect everyone else to do the same.  This is what they expect from others, not how they treat others.  They consider it completely acceptable to mock others and laugh at them in their face.  They can pull mocking faces and roll their eyes but will take extreme umbrage if they consider that you have even glanced at them in a funny way.

They usually use sarcasm and word play to simulate humour.  It is because they don’t have a sense of humour that they find it very hard to play fun and silly games.  They are usually keen on competitive games and they will play to win, not to have fun, the ones that are just for fun they find embarrassing and it makes them feel self-conscious.  This is different from taking centre stage which narcissists adore, and entertaining an audience as opposed to entertaining each other just for the sake of being together.  It is for this reason that a narcissist finds it almost impossible to play with their children.  When they are teaching a game to a child, they will rarely let them win, even if it is chess or scrabble where the child obviously has much less developed skills set.

The narcissist cannot tell the difference between being teased and being mocked.  Most people know that you don’t really tease someone unless you have a certain affection for them.  The narcissist will feel threatened by being teased because it is a mild form of intimacy and they will think that they are being laughed at so their reaction will be

In fact, a narcissist seems to be more comfortable in an overtly hostile and aggressive encounter than they are when they are being teased.  If a narcissist is being mocked they will have total sense of humour failure and is highly likely to punish or seek revenge at some later date.  At the same time a narcissist sees absolutely no problem with them pointing their finger at someone else and sneering/jeering/ridiculing and humiliating in a vindictive and malicious way.

Narcissists think that being overtly rude to someone or about someone is a form of humour, because they have very poor communication skills they can make people feel very uncomfortable in social settings, they can carry on saying ridiculous things without any awareness of the discomfort that they are causing others to feel.  They enjoy making people blush as that is an emotional response and it makes them feel good about themselves at another’s expense.

Humour plays an important part in any close relationship, it helps people to bond and to feel close to one another.  When people cannot laugh together (which is very different from laughing at someone or something) that closeness can never evolve as a close connection can never develop and both parties will be on the defensive.  Humour is also a useful tool when approaching a sensitive issue, it can be used to gauge what another person is feeling about a situation.  A narcissist cannot employ this tactic as they don’t care what the other person feels or wants, it is not in their interest and have a tendency to attack things head on from their very self-righteous stand point without giving consideration for the consequences either for the other person or on the outcome of their attack.