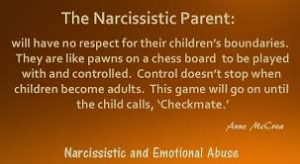 Narcissistic parents will interfere with all of their children’s relationships.  Those will include: