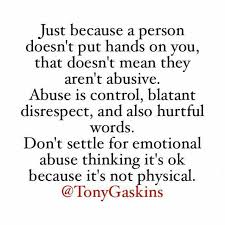 Secrecy is all about withholding information and a failure to share facts (financial, social and familial),  thoughts (their own or others around you in the community) and their own “feelings”.  A person who withholds information refuses to engage in a healthy give and take relationship.  They live by the the notion that “knowledge/information  is power”, which is why they are so reluctant to share.

Negating everything you say

This is when someone rejects everything that you say.  It is an extraordinary phenomenon because they will not let you say what you think without interrupting you and telling you that you are wrong.  They do it when you are talking about your feelings, they will tell you why you “shouldn’t” feel the way you do, they will contradict you on general topics with such force and certainty that you begin to doubt yourself (even if you are an expert on the matter), they will judge your relationships and tell you what they are like (usually negative).

The target of the abuse may share her positive view about a film she just saw, and the abuser may then attempt to convince her that her opinion is wrong. This is an example of countering. Countering is a way of dismissing the victim’s feelings, thoughts and experiences on a regular basis.

Discounting is to deny that the victim of the abuse has any right to her thoughts or feelings. It may come out as criticism but criticism of a particular kind. The abuser may tell the victim on a regular basis that she is too sensitive, too childish, has no sense of humour, no friends or tends to make a fuss over nothing. The abuser thereby denies the victim’s inner reality, indirectly telling her that how she feels and what she experiences is fundamentally wrong.

This is when the abuser categorically refuses to talk about or discuss a topic, either because they regard it as criticism, it is something that they want to keep secret or because it is not a topic that they know anything about.  They can do this by constantly changing the subject, getting angry or by physically leaving your company (walking off in a huff).

Jokes are supposed to be funny for both the teller and the listener, hostile “jokes” are when the narcissist knows that they are insulting you but wrap it up like it is a joke.  It is usually accompanied by a passive aggressive chuckle or snigger.  They will insult in such an extreme way that it could not be taken “seriously”, but they know, that you know they meant the insult and expect you to laugh along with them.

Projection is when the narcissist has a quality about themselves that they do not like, so they project that quality on to somebody else.  It can be anything from a personality trait “you are so lazy” to something like “you have no friends”.

Blaming is when the narcissist blames events or outcomes onto external influences.  It could be that they didn’t win a football match because of the weather or not getting a promotion in work because of something someone said about her behind her back.  Or it could be that someone got annoyed with them for being rude and their reaction is that it is the other person’s fault because they are “too sensitive” or “it is not my fault that their marriage is on the rocks”.  Nothing is ever their fault, so they will always have something or someone to deflect the blame on to, it is automatic for them.

Being highly judgemental and critical of others

Being judgemental and critical is what narcissists do to boost their own self-esteem and ego.  So all the people around them will be “idiots” or “stupid” (unless that person is someone who they admire for being rich/powerful or influential in some way).  They will happily criticise others for having behaviours that they obviously have themselves (although they cannot/will not acknowledge them).  They will make wild assumptions on very little evidence to support their criticism of someone and will frequently go on character assassinations on those who they consider a threat in some way.  It might be someone at work, someone they consider better looking, more intelligent or even someone who they think is more popular than they are.   In general they attack the reputation of others to buoy their own ego.

This is when the narcissist makes ambitions, dreams or likes of someone else look insignificant, unimportant or ridiculous.  They can also try to make the achievements of others look trivial, in fact the more accomplished the victim is the more they will be sneered at (unless they think that the achievements of another person “makes them look good”)

Name calling is when the narcissist calls you rude, hostile or unpleasant names.  It is done to humiliate and keep their victim in a frightened or subdued state and will often be done as a “joke”.

The narcissist will tell the person in a forcible way that “if you do not do as I say, there will be trouble” or “if you ever say/do that again I will”.  Threats can be delivered in an aggressive way, in a cold and demonic voice or as a “joke” which will be accompanied by very aggressive body language.

This is done to intimidate and it can either be by putting their face too close to yours, so that they are practically spitting at you or it can be done by towering over you when you are sitting or lying down or by touching another person inappropriately, this does not necessarily have to be sexual, it can be by punching someone on the arm (too hard) or by pushing them out of the way.

This is when they ignore you and everything that you say.  They just pretend that you are invisible.  They will not look at you or answer you in any way (see section on “Silent Treatment)

Telling instead of asking

Ordering people around is very common with narcissists.  They will say things like “get me a cup of coffee” without saying please or thank you.  It is common for them to order to waiting staff around in a restaurant for example, treating them like second class citizens when ordering from the menu or snapping their fingers or shouting at them when they want service. Instead of saying things like “Excuse me, can you tell me where such a place is please?”, they will just say “Where is such a place”

This can range from forgetting to call you to forgetting to take the bins out.  The narcissist will keep forgetting to do jobs that they do not like which usually leaves two options, you constantly remind them and they will accuse you of being a nag, or you just do the job yourself because it is easier.  They will also forget things like anniversaries and birthdays either because they are too self-absorbed to remember or to let you know that you are not important enough to them to make the effort.  However, they will become extremely abusive if any celebration of them is ignored.

Narcissists are very good at rewriting history so that they always come out on top, the champion, the hero.   However,  they are also happy with the victim role, depending on who they are talking to.  They will deny that anything was said or done that does not present them in a good light.