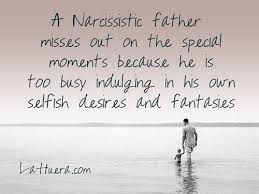 Narcissistic fathers are as toxic to their sons as narcissistic mothers are to their daughters. Since narcissistic parents have absolutely no idea about parenting and age appropriate behaviour, they will tell their very young sons “to stop crying and be a man”, call them names like “cry baby”, “Mummy’s boy” or even “don’t be such a little girl”.  This causes the son to try to suppress his emotion and put a brave face on everything, even physical injury.  Suppressed emotions will always have a way of coming to the surface albeit in a distorted, perverted and unrecognizable form.

Sons of narcissistic fathers are stripped of their self-confidence from a very early age. The narcissistic father (like the narcissistic mother) will constantly be in competition with his son, he will be condescending, arrogant, pompus and nothing his son does will ever be good enough. He will always flip any achievement by his son into something that was “thanks” to the father’s influence or he will dismiss it as irrelevant he will knock everything that his son does on the most pathetic level, it could be as benign as learning to tie shoe laces or riding a bike. He will always have learnt it earlier and done it better.  He will be very sneering towards his son, for example his son will show him a painting he just did and the father will say “that isn’t very good is it, it doesn’t look like a horse to me.  You know what a horse looks like why can’t you do better?”

A narcissistic father will compete relentlessly with his sons, even if he is teaching his son the rules of a game, he will not let his son win one point.  It doesn’t matter what the game is, it could be chess or rugby, if it is rugby the narcissist father will not give a second thought to physically hurting his son to gain a point (even though he is twice the size of his son).

The narcissistic father will demandrespect from his children, even though he has no respect for anyone else.  He will have a tendency to assume a very authoritarian approach to parenting (almost Victorian, children should be seen and not heard).  The narcissistic father will use shame to control his son and will lash out with the most damning of comments without any concern for the hurt and pain he causes.  Like all narcissists he is totally without remorse or empathy he can see his son writhe in pain or embarrassment and be totally unmoved, if it isn’t about him then it just doesn’t matter.  The narcissist father knows that his son is his captive and he uses this advantage to its absolute maximum.  He will treat him as his servant, there to do his bidding, he will bark orders and never show any gratitude or appreciation for that which was done for him.  He can leave his son hanging around while he indulges in his favourite hobby without giving any thought about his well-being. If his son asks him for something he will shame him again for being a nuisance and his son will internalize a sense of guilt for being a burden.

Pompous, arrogant and over confident he will have opinions about all issues (even topics that he knows absolutely nothing about).  He will deliver his opinions with such certainty that his son will find it very difficult to express himself let alone have a counter argument.  The narcissist father does not have conversations with his son, he delivers lectures.  He will criticise everyone (especially other men) and will consider them all to be stupid, even when he has never spoken to them.

If his son has a hobby or a sport, the father will tend to become over involved and micromanage the activity making his son almost irrelevant, the message being that his son will not be able to do it as well as he does.  The actual ability of the father is irrelevant to the narcissist, he will automatically assume superiority.

When out walking the father will always walk in front of his son to show his superior status, never beside him.  The father might also put his son in physical danger without giving it a second thought. These fathers are always emotionally aloof and will become irrationally irritated if any emotional demands are placed on them.  They will be very emotionally abusive and will sneer and deride any signs of weakness in their son, even from as young as 2 years.  The narcissist father will “forget” that his son is a child and will place adult expectations on him.  This type of father will constantly play power games with his son to show his control, without thinking (or probably even aware) about the consequences.  A narcissist father will always give his son age inappropriate tasks to perform.  This will make the child feel helpless, frustrated, humiliated and he will resent his father for putting him in that situation.  He might despise his father in childhood but will be unable to express himself.  Later in life he could have outbursts of uncontrollable rage and direct them at someone else, when he is really feeling his own sense of shame.  The feelings of resentment towards his father do not go away in adulthood because the narcissist father will continue to treat his son like a child when he is an adult and continue to bully and sneer at him.

It is very common for sons of narcissists to become narcissistic themselves.  This is because their emotional development gets arrested when they are very young, because their needs are not met.  A child will get his sense of self from their same sex parent, having a narcissistic father will inevitably create huge issues about being good-enough, worthy of love and acceptance.  No matter how loving his mother is this son will spend his life trying to gain his father’s approval, which of course he will never get. Any sort of acknowledgement by the narcissistic father will be met with a disproportional amount of gratitude from his son and in turn will make him try harder to please him.

A narcissistic father will set his son up to fail.  Nothing would threaten him more than if his son was more successful that he was.  The attitudes and behaviour of a narcissistic father can leave his son with intimacy issues and they will feel it very difficult to build significant relationships with others (friendships as well as partners), they may also partner with someone who is abusive towards them because that is what their definition of “love” feels like: cold, hyper critical and emotionally unavailable.

13 thoughts on “Sons of narcissistic fathers”