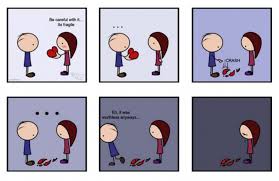 There is a common myth that everyone has a conscience and the ability to empathise.  This is not the case with people who have narcissistic personality disorder, sociopaths and psychopaths.  People who are involved with narcissists find that they are being manipulated and devalued which leaves their victims feeling worthless, panicky and often suicidal.  If you approach your abuser and let them know that you are “in trouble” the narcissist will take the fact that their partner is feeling suicidal and use it to garner sympathy from others for being a “tolerant, loving person having to put up with a suicidal maniac”.  They will always couch their concern in loving terms so that it looks like empathy, they know that this makes them look good but in reality they are doing it to  harvest attention  and to create an image for themselves, they will not do anything to change their behaviour, will treat you like your suicidal “weakness” is just another of your failings and will further alienate you from any support system you might have.

Their manipulation is psychologically and emotionally devastating and can leave lifelong emotional scars especially if you have been narcissistically abused by your parent(s).  Their abuse, like most abusers is done face to face behind closed doors or by a smear campaign behind your back.  Because narcissists believe their own lies, they will use charm and charisma while they are cruelly annihilating your reputation and are very convincing to any audience.

Survivors frequently blame themselves because they are not really sure what they have just experienced and are reeling in a state of hurt and confusion.  Once you learn the language and the dynamics of narcissistic abuse you will have to tools and knowledge to heal, to be aware of other predatory types and the ability to better take care of yourself.

These individuals transcend gender, socio economic groups and race.  They are masters in the art of manipulation, they use punishment and narcissistic rage to control people.  They have absolutely no sense of loyalty, will betray the trust of those close to them without any remorse and will verbally attack at any time, but in particular when you are low for example just lost a job, lost a loved one or had any sort of tragedy in your life this is don specifically to up the destruction and devastation in your life, they do it when you are down because it is easier for them to upset/hurt you.  They will do this just because they have a strong sadistic streak and humiliating and abusing other people amuses and gives them a sense of power.

The tools that they use to degrade others include:

The narcissist will take and use anything that you might have confided in them and use it against you.  They harvest the information by putting on an act of being trustworthy and concerned about you so you are open with them.  They will then use your vulnerabilities to hurt you in the future, they have no limits to what they will use to inflict pain. Inflicting pain makes them feel powerful and they will use it to diminish and belittle.

Since pathological envy is an inherent part of the narcissistic personality disorder they will negate or diminish anything that you might accomplish.  Frequently they will claim it as their own “the only reason that you could do that is because I helped you”, or they will steal your opinions and ideas and then tell you about them as though you are too stupid to fully understand.  They will laugh at your dreams or aspirations, they will tell you that you have a horrible personality they will claim that any social life you have is directly attributable to their charming and fascinating company.  They will destroy you in every way that they can think of, they have to be the winner in your relationship and the only way that they can do that is through sabotage, corruption and nefarious means.

After the ideation stage the narcissist will oscillate between making kind gestures and being narcissistic, this is another form of manipulation because it is very destabilising (it would be much easier to come to terms with if they were nasty all of the time).  They will use your desire to get back to the “nice part of them” to keep tugging at your puppet strings.  Nothing you do will ever be good enough at this stage and if they do act nice they will make it very clear that it is because they are nice, not because you deserve it.