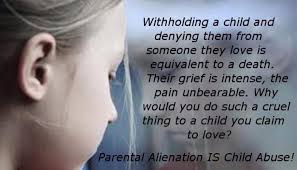 There are varying degrees of parental alienation when separating from a narcissist.  The most extreme cases are absolutely ruthless in trying to eliminate their ex from their child’s life.  When things get a bit rocky they will start a smear campaign that could go on for years.  They will depict themselves as the victim of abuse, neglect and cruelty and will do everything that they can to keep their child away from their ex.  The child will know very well that they are expected to take sides and will be told a whole lot of age inappropriate things (real or imaginary) about the ex.

Here are some of the faces of narcissism you can expect to see if you are fighting for custody (joint or otherwise).

The goal of the narcissistic parent is to destroy the love that their child has for their other parent using their favourite tools of lies and manipulation.  There is absolutely no doubt, that this is emotional and mental abuse as the narcissistic parent will be determined to change the child’s perception of their other parent in a highly toxic and negative way.  This is an extremely sick and selfish parent who could inflict such damage on their own off spring.

A mature parent will set their anger and upset aside to protect their child from an argument that is not theirs and that they are not old enough to fully understand.   Not so with a narcissist parent, they will grab their child and throw them into the conflict, use them as a human shield and a comforter at the same time.   The ex will have grave difficulty trying to remove the child out of the conflict because once a narcissist is angry they do not care what they say or who they hurt – the game is on and they are there to win, even if it means destroying everything around them in the process.  There is absolutely no point in trying to talk reason to these parents because they will just up the bar.  They do not take responsibility for their own actions, so if the child is exhibiting signs of high anxiety it will not be the narcissist’s fault, it will be the ex’s.

The only way that you can parent at this stage is by being a normal parent who listens to your children’s fear, anxieties and insecurities.  If your child talks at you in the same mode as their narcissistic parent it is important to correct their behaviour immediately.  This can be difficult especially if you have limited time with your child and want it to be as pleasurable as possible.

A parent divorcing a narcissistic partner can be sure to expect: