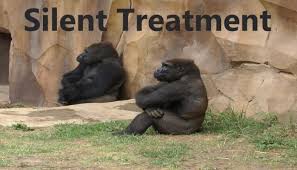 The silent treatment is a behaviour used by emotionally immature and manipulative people.  It is usually used by narcissists to punish people for something that they are unhappy about.  It is one of their favourite weapons and it can go on for days and even weeks/months.

It is extremely frustrating to be on the receiving end of the silent treatment because it means:

Narcissists deliberately harm you by using the silent treatment, they deny you any emotional care, refuse to acknowledge even the smallest of accomplishment (like a well cooked meal), starve you of affection and compliments.  Instead they reject any attempt at communication, degrade and ignore your emotional needs to the point where it is emotional abuse.  When this happens on a regular basis it damages the relationship permanently as it is done to control, to punish you for having done something that the narcissist didn’t like and to destroy your mental and physical well-being.

Narcissists are able to emotionally switch off from the pain and suffering that s/he is causing his victim.  In public they will be charming, happy and calm and so many will be fooled by this act. They love the silent treatment because they are not being overtly aggressive, and mental abuse leaves no visible bruises so if you ask them what is wrong they will say “nothing”, “I am not angry”.  This is typical narcissistic behaviour because the message is “there is nothing wrong with me, there must be something wrong with you”.  They love the confusion and cognitive dissonance that this causes because they know that you know that they are ignoring you and this gives them a thrill.  Most people are solution focused when they have a disagreement.  Not so with the narcissist they are in the argument to win and if they cannot win an argument with words they will switch to immature and infantile behaviours.

The silent treatment also serves to avoid controversial topics that the narcissist wants to steer clear of such as their own behaviour and lack of responsibility.  It also sends out a less than worthy message to their victim “I am entitled to ignore you completely as punishment for your bad behaviour, you did not serve me properly so now you must suffer”.

The silent treatment is always abuse, it creates a horrible and tense atmosphere, everyone becomes anxious because nothing is being said but something is clearly very wrong and they won’t tell you what it is.  All communication is severed and the narcissist will dish out buckets of hostile body language to upgrade their punishment.  Usually the person receiving the silent treatment will try harder (just like the narcissist wanted) to break the silence to remove the black cloud hanging over them.  The “motivation” for the silent treatment is just one, it is to control the other person and the cause can be either real or imagined it makes no difference in the mind of a narcissist because you do not exist as a person, just someone to serve them and should you move off that trajectory they will come after you to put you right back “where you belong”.

The narcissist is fully aware of the damage and hurt that the silent treatment is doing to you. They simply do not care, they can watch their victim slide into depression, addiction, self-harm and expressions of suicidal thoughts but the narcissist simply does not care, they walk away and refuse to deal with it, even though they are the cause of the problem.  In fact, they will use the physical effects of damage that they have inflicted on you (depression, mood swings, social anxiety etc.) to imply that you are weak and a burden on them.  This way they get credit for being such a good person for standing by someone who is clearly deranged in their eyes and in the eyes of others, as they will make it publically known when and where ever they can.

Another way that they can use the silent treatment is by making themselves physically absent and uncontactable.  They will do this to make you worry about their physical safety or to make you think that they have met someone else and are now focusing on that new person.  They intend for you to get into a panic, try and find them and to make desperate pleas to them to get in touch just so that you know that they are okay, this thrills the narcissist as they get a rush of power from your anguish.   All silent actions such as body language, not buying you a Christmas present, pulling away when you go to kiss them, refusing to acknowledge you when they greet everyone else enthusiastically or looking furious when you are having an animated conversation at a dinner party are all ways in which they can control you in a way that you cannot call them out on.  When they do this day in, day out, it is absolutely exhausting and it is designed to wear you down, humiliate you and to let you know that they consider you to be much less than and unworthy of their attention.