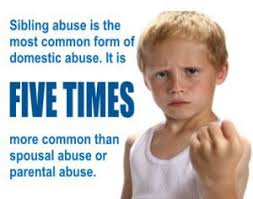 Being bullied, humiliated and treated with distain and contempt is much more than sibling rivalry

Sibling bullying is an integral part of a dysfunctional family system and orchestrated by one or both parents.  A narcissistic parent will enjoy seeing one of their children being bullied because it deflects the anger that the children feel towards their parents “for not doing their job properly”, so they actively encourage it. Usually the dysfunction within a family will start very early on, roles will be assigned into golden child, scapegoat and lost child as infants.

This bullying is relentless because

Bullying is usually about chronic disrespect for that child’s privacy, dignity, name calling and physical abuse.  Somehow the rest of the family is massively invested with what is going on with the scapegoat.

This type of bullying is extremely destructive because the “chosen” child will be expected to take on all of the pain within a family but at the same time they will be ostracized.   They will always be told that they are at the bottom of the pile and that they do not belong to the family.  Any child who has been told that they have been rejected from the family unit will jump through hoops in an attempt to “belong” and this is exactly what the narcissistic parent is trying to achieve.   The mother of the scapegoat can often be in direct competition with her (in her eyes) from as early as 24 months.

Sibling bullying manifests itself in being hounded, they are after your humanity, your dignity and they want to harm you, yet they call themselves “family”. It is serious abuse but some people think that because it exists within the “family’ context that is justified.  It is not justified – abuse is abuse and we need to call it out.

Bullies are not always obvious, they can be completely charming and affable – in fact they make a point of being so.  Like all abuse, it takes place behind closed doors.  However, if they are abusive in public and someone calls them out on it, they will be super charming to that person at the time, but inevitably punish the child at a later date for “showing them up”.  Bullies are very good at creating fear and insecurity in their victims to keep them quiet and obedient.