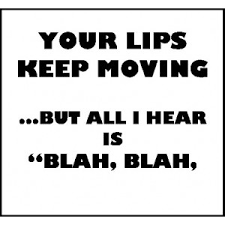 When a narcissist feels threatened or confused by something they will go in to a mode of speaking absolute gibberish.  This is a defence mechanism and is designed not to make sense.  You will spend all of your energy trying to work out what they are trying to say rather than getting involved in a solution based conversation.  People refer to it as “word salad”, it essentially means that everything is tossed up together and they aren’t making any sense at all.  If you find yourself trying to converse with someone who is using this tool of confusion the only thing that you can do is to disengage and walk away.  You cannot make someone make sense if they are determined not to.

When a narcissist is spewing these diatribes at you, do not try to help them make sense or take what they say seriously in anyway, it is a tool to block you and the only solution is walk away.  Their “arguments” will mix up past, present and future, will refer to things that you are not talking about, will be full of hateful name calling and blame and will often be fuelled by narcissistic rage.

If the argument is not perceived as an imminent threat by the narcissist and is just a topic that they don’t want to discuss, there are other techniques that they will employ.  Such as: