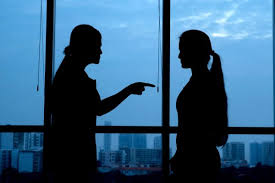 One of the most difficult things to understand in a relationship with a narcissist is their projection of their own dysfunctional behaviour on to you.  This is particularly difficult and painful if you happen to be a child of narcissistic parent(s) because before you are developmentally mature you are being told some really toxic information about who and what you are, because you “trust” your parent you believe them not realizing that they are projecting all the thing that they do not like about themselves on to a very small, vulnerable and suggestable child.  A narcissist has no boundaries so they will even consider a baby to be “bad” if they cry or won’t go to sleep.  Narcissists are not problem solvers so they will never consider why a baby is crying and what could they do to remedy the situation, they will just think that the baby is doing to annoy them and will give them their “just punishment” by ignoring them, putting them out in the garden or yelling at them (narcissistic rage).

Once that child becomes able to talk the narcissist parent will start to name call such as telling the child that they are selfish (“think of all the sacrifices I made for you”), always looking for attention (“You are so needy, will you give me some space”), a horrible child, truly ghastly child, they will threaten abandonment, call them liars (if a child dare to mention that the parent’s behavior is less than perfect (such as favouritism) the will swing around and say well “if you were nicer to me I would be nicer to you” or plain “don’t be so stupid”, or that they are a failure.  On a rational level the child knows that they did not do or are not what they are accused of being, but because they are hostage to their parent(s), there isn’t any way out. As a result the child either numbs out completely or becomes highly reactive and hyper sensitive trying to anticipate the parent(s) needs before they do.

What is actually happening here is that the narcissist cannot tolerate the feeling of shame that s/he has so they project their behavior on to you to protect their own very fragile sense of self and make you believe that it is your fault.

With regard to adult relationships the narcissist will try to make you feel like you have just found your soul mate (be it a lover or a new friend), that you have so much in common – you like the same everything from values, food, film, music, books and holiday destinations (what could possibly go wrong?).  They will put you on a pedestal and will admire everything about you in an exaggerated way.  The thing is that when you try to climb down off the pedestal, they won’t let you.  So when you admit weaknesses or vulnerability they will totally invalidate what you said because s/he needs you to be perfect to reflect/mirror their own “perfection”.  They believe that you are going to save them from themselves by being this perfect person that they have created in their heads and “make it all better”.  When they realise that you are not going to make them feel better about themselves, the mask of the false self, slips and their true damaged self emerges.  They don’t realise that feeling better about themselves cannot be sourced externally. This also is a dynamic that happens between parents and children, the parent thought that children would make them feel fulfilled and fill the emptiness that they have inside them, but the children don’t, they have their own needs (that will never be met) and therefore have failed the parent aka “bad, selfish, horrible and needy irritants.

Because you didn’t make the narcissist feel better about themselves they will consider that you just didn’t give enough admiration, money, love, attention and praise.  There are a number of manipulation tactics that they will use to “make you try harder” such as narcissistic rage, silent treatment, never appreciating anything that you do for them, name calling and gaslighting etc.  The once adoring partner/friend turns into a monster and they will go to extreme lengths to hurt you and everything about you will annoy them and will be “wrong”.  They will criticise the way you look, the way you cook they will rant and rave at the way you speak until finally you feel like you are walking on eggshells and will tip toe around them just “to keep the peace”.  It is at this stage that the person who is involved with a narcissist will deny their own self of sense of self explicitly to avoid the wrath of the narcissist for just being.  Anyone with any sense of self left will leave the relationship at this stage (and will have to acknowledge that a smear campaign will be mounted against you always – because the narcissist is never in the wrong).  This is especially hard since the abuse did not come from you and other people will not see the dynamic and like Eleanor Rigby

Waits at the window, wearing the face
That she keeps in a jar by the door
Who is it for?

With a narcissist, it is for absolutely everyone else.  The less they know a person the harder they try to keep their mask on.  So narcissists will often perform amazing acts of kindness to complete strangers and neglect and ignore their own family.

Because the narcissist cannot even consider/contemplate their own inadequacies, terrible behaviour and psychotic turns they have to make it be someone else’s fault (projection) and who better than their nearest and dearest because they can abuse behind closed doors and anyone else would just walk away (anyone who wasn’t carrying their own narcissistic childhood wounds).

A narcissist will not take responsibility for their own horrendous behaviour therefore in their mind it has to be someone else’s fault.  They can flatly deny that something happened at all or someone else “made them do it” and they absolutely do not care who they might hurt in the process.  They cannot bare the fact that they feel so empty inside, they constantly compare themselves to others which makes the insatiable gossips and are riddled with envy, jealousy and the constant need to “put other people down” either by going after a person’s reputation, making up lies or by name calling.  All of this negative activity makes them feel better than/superior to everyone else, but only in the very short term.  Inevitably it has no long term feel good feeling, they know what they are doing and it only fuels their feelings of shame and unworthiness, because they have been behaving like this since childhood, acting out comes to them on automatic pilot, they have done it before they realise what they are doing and the damage just adds to their shame which in turn has to be projected on to someone else.

One of the most confusing thing about this kind of behaviour is that a narcissist can blame someone for something when that person wasn’t even present when a situation occurred (that the narcissist refuses to take responsibility for) the narcissist will loudly claim that another was responsible and that poor unsuspecting person will be completely confused when others start to behave in a hostile way around them.  You need to realise that their projection onto you was not your fault and you were not selected because you were weak, you were selected because either you don’t know what they are saying to you behind your back or because you won’t confront them out on their amoral behaviour, you know it isn’t going to get you anywhere and will only make them even more vindictive.

Einstein said that the most dangerous people are those who believe in their own lies.  So it is with narcissists they will look you straight in the eye and tell a complete lie.  With most “normal” people you can tell if they are lying/fabricating or exaggerating too much, because they look a little uncomfortable.  Not so with the narcissist they are extremely comfortable with their lies, because if their lie backfires on them they simply flatly deny that they told it and make up another one.

In synthesis, projection is all about a narcissist blaming someone else for their own psychotic, vindictive, cruel and pathological behaviour.  It is a very immature and deceitful way to behave but at this stage I hope you realise that there is absolutely no point in expecting any other type of behaviour from a narcissist and remember once a narcissist always a narcissist if they have done it once they will do it again.  Don’t be lulled into a false sense of togetherness with a narcissist, they are only being “nice” as a means to an end.  It is only a matter of time before the mask slips again.