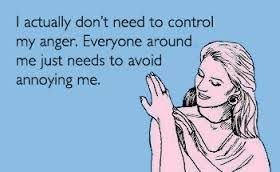 Narcissistic rage is a manipulation tool that is used by narcissists to frighten, silence, hurt or break their “opponent”.  It can flare up in seconds and is often used against children or innocent people.  It is not genuine anger it is a tool narcissists use to get people to do what they want them to do. It starts off like a dog growling, the message being “I am only growling now, but this could escalate in to a full blown attack if you do not back away”.

Narcissistic rage occurs when the narcissist perceives s/he is being personally “attacked/threatened” by someone or something else. Their rage can be expressed through verbal abuse, physical abuse or by storming off.  An outburst can happen every day, several times a day or every few months but the person who is in contact with the narcissist will never know when it is going to happen, so they are constantly on high alert and will often make huge self-sacrifices to prevent expressions of dissatisfaction escalating into full blown rage.  The sacrifices that other people make to appease the narcissist pleases them because it means that they get to control others.  After a narcissist has had a raging outburst they will be unwilling to discuss the source and appropriateness of their reaction.  When the narcissists self-image is challenged in any way it will nearly always lead to narcissistic rage, if they are in public they might postpone it, but it will emerge at a later date. Narcissistic rage is a reaction to” narcissistic injury”- a perceived threat (a “threat” to a narcissist can very often be something that someone else would not even notice) to their self-worth or self-esteem because it is so fragile the defend it in a totally exaggerated way.

They rage in two ways: they erupt like a volcano getting very heated very quickly.  This can include just randomly ranting and raving, a very personal verbal attack or sometimes even physical (usually in the form of shoving and poking, but it can be much worse) or they can be passive-aggressive. The passive-aggressive reaction includes the silent treatment, sulking and behaving like a whipped dog, like they have just been “attacked” in a most offensive manner.  False weakness and vulnerability are two weapons that narcissists will often pull out of their arsenal if they think that open aggression will not work.

Do not confuse genuine anger with the narcissistic rage. Anger is a natural reaction when exposed to provocation. Anger usually occurs from a rational cause and dissipates when one is able to express it. The fuming rage the narcissist feels is different from the anger that people usually feel; it is irrational and severely blown out of proportion from an often insignificant remark or action.

Narcissists need constant admiration, attention and compliments. They live with the illusion that they are perfect and that other people revere them. That makes them dependent on other people to keep their self-esteem high or at least at an acceptable level for them. Therefore, any challenge, mildly negative remark, or disagreement from another person is considered criticism, rejection and even mockery. They can get upset about the most inappropriate things.  For example, they could say that a two-year old behaved in a certain way to deliberately provoke them, or that someone did something to annoy/hurt them when the narcissist was the furthest thing from their mind.