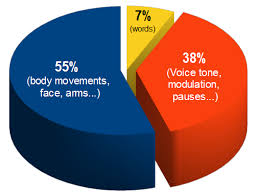 An overt narcissist will have a tendency to have haughty arrogant postures.  For example, the male narcissist might walk down the street with his chest puffed up or move with a swanky stride.  The overt female narcissist will walk into a room as though she was walking down a cat walk.  Covert narcissists are not so “obvious” with their posturing.  However, there all have other strange types of body language such as: