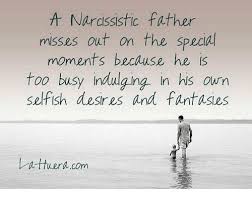 It is fair to say that most narcissistic fathers have less impact on their children than narcissistic mothers do.  That may well be changing, but certainly in the past this was the case, purely because in general the mother spent more time with her young children than her male partner did.  However, it is fairly well accepted that children take their role model and get their self-esteem from their same sex parent.

Narcissistic fathers are very similar to their female counter parts.  They disregard boundaries and only provide their children with conditional love.  That condition depends on their performance and that “performance” has to be perfect to project an image of who he thinks that he is.  He objectifies his children and his self-image will change depending on the company he is in, so it could be 2 or 3 different images in one day and the child will be expected to change with every character change that he makes.  It is an impossible situation because the child has to be on high alert at all times so that they can mimic their father’s behaviour and they will be let know if they do not perform the way the father expects them to, either by name calling, being ignored or a warning glance that alerts the child that they will be punished later for non-compliance

Narcissistic fathers will also withhold affection and control their children (and often wife) by threatening to abandon them or with anger and aggression.  This creates a very insecure family unit which is very often a repetition of patterns of behaviour played out in past generations.  The husband can go from being a brutal and tyrannical father to a bossy, arrogant over bearing husband into the charming man next door, the pious church goer and volunteer for worthy causes, to a needy victim playing father looking for emotional support from his children all within the space of a day.  There is a myth that girls marry the personality type of their fathers and boys marry their mothers, but they can marry their same sex parent too as the type of “love” that they are given by a narcissist feels “normal”.

The daughters of narcissistic fathers do not feel valued by him except for what they could give him in terms of narcissistic supply.  Sometimes narcissistic fathers will flirt with their daughters to try to woo more admiration out of them.  They can be full of compliments and praise when she is young but turn cold and critical once she gets older and stops being “daddy’s baby girl” and tries to get some independence.  This breaking away causes narcissistic injury and is met with steely hostility.  Once a father turns on his daughter in this way, nothing is ever good enough for them.  They can sneer and deride their daughter or try to entice them back into the “loop” which would take away their limited sense of an independent self, either way it is something that will follow the daughter through to adulthood and influence her choice of partner which will be peppered by feelings of not being good enough for someone who is kind to her, feel vulnerable  and insecure that they will be dumped as she was by her father when she tried to be herself, or she could develop a selfless co-dependent relationship where she serves the needs of a narcissists and puts aside who she really is.   This might feel “safe” but it most certainly is not a healthy relationship.

The sons of narcissistic fathers usually suffer more from emotional abuse than their daughters do.  The father is usually very competitive with his sons and will often either put down their own sons to buoy up their own sense of superiority or simply ignore them completely.  Sometimes they oscillate between the two, the sons often just admit defeat as this competition is very often in sport, where they do not stand a chance (because the narcissistic father will not let his son beat him, even if it means physically or emotionally hurting his child, humiliating him or making him cry).  Like with a narcissistic mother a son will never feel good enough for his father, because if he “beats” him at something his father will shame him and if he doesn’t he will be sneered at.

As with narcissistic mothers, both boys and girls of narcissistic fathers need to be seen and be validated.  That will never happen because narcissists are incapable of loving or admitting that anyone is an equal to them and the more they belittle their sons the more superior they feel.  Some children of narcissists become narcissists themselves because they are so traumatised by early childhood experiences that their emotional development gets arrested.  Perhaps they follow their father’s model to try to attract his attention, maybe they just get wounded and that is as far as they dare to go or they might learn from the father’s role model how to use and manipulate people.

Having a narcissistic father is horrible for all of the family.  Including his “golden child”, the golden child is often seen as the privileged one.  However, it is an excellent way to divide and conquer children, favouritism begets animosity and if children are hostile between each other (even if it is just a sense of “that’s not fair”) they are much easier to control, as they will not know what makes the favourite and as long as this insecurity exists between each other they will not gang up on the parents.

If a golden child embraces their enhanced position of privilege they will be resented, ostracised and bullied by their siblings, if they don’t they will be despised by both the fawning parent and the other siblings because they are still the chosen child and they are trying to reject it.   They will still be mistrusted because they are allowed special privileges that the other children are not allowed and yet they are either trying to reject it or they will feel ridiculously entitled and do what they can to maintain their privilege.  Everything within a narcissistic family is always very unstable.  The father who focuses on the “golden child” will not care too much about his other children, these children will try very hard to get the attention of their father, but they will only get his attention when he wants something from them and is often mean, cruel and cold towards them.

So here are the main traits of narcissistic fathers?

The narcissistic father is bossy, over bearing and can be cruel, pompous, arrogant and self-serving.  He is totally self-absorbed and gets angry or into a full blown rage if his demands are not met.  His behaviour is abusive and very damaging to his children the scars of which can be carried into adulthood.