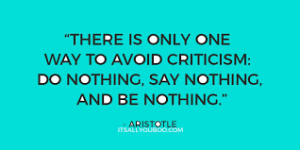 No one likes criticism, it is part of human nature, sometimes even constructive criticism can cause us to feel defensive.  However, when a narcissist is criticised, even slightly they become hyper defensive and aggressive and will flip any criticism back on to the person who criticised (or allegedly criticised them) and will say things like “well you’re a”, “you did…” “s/he is just jealous or crazy”.  If they even anticipate that you are going to make some sort of comment about them they will try to shut-you-down or will leave the room.  They cannot bare to see their image of themselves as anything less than 100% perfect, as though even a tiny chink in their armour would bring their whole false persona tumbling down.

Like all people who are very sensitive to criticism they are very vocal, boorish and insulting to and about others.  They do this so that they can feel “better than” those around them.  In other words, they push other people down to buoy their own selves up.  With such a rigid and relentless self-defence built up around them, they are never able to let anyone get close to them.  At the same time, they will “assume” knowledge and intimacy with people that they have only just met.  This comes from having only a very minimal level of self-awareness and so they will assume that to know very little about someone else is to know all. This perceived image of others, like their image of themselves is constantly changing depending on their mood, what they have eaten, who they are with and probably the weather too.

When they are being criticised or think that they might be, they don’t feel safe and go into hyper vigilance mode.  Narcissists frequently do not know the difference between criticism and being teased (due to their poor sense of humour and inability to engage properly with others) so teasing them might garner the same aggressive/sulky reaction.  Usually if someone teases it is out of a sense of fondness for the other person.  Not so with the narcissist they tease to humiliate, taunt and embarrass others with absolute loose abandon.

Narcissists also perceive having different values or taking a different stance from them in a discussion as a form of criticism.  If they do not flare up with narcissistic rage they might easily shift their point of view to the position that you took at the beginning of the disagreement and will say “but that is exactly what I said at the beginning” and proceed to treat you like a fool.  When you realise that you are dealing with a narcissist there is absolutely no point in trying to follow their line of argument because there usually isn’t one.

Always having to be “right” is a defence mechanism for the narcissist, they have to protect their very fragile and insecure egos at all times, which is why they go crazy if anyone questions (or even pulls a funny face at) anything they said or did.  If someone expresses a doubt about them, it could turn into self-doubt and that is something that they are not going to risk.  In other words, attack is the best method of defence.  If they realise that their positon in an argument is not holding up, they can haul in an arsenal of defences such as to attack the other person on an issue that you were not even talking about, blame someone or something else, start to talk gibberish, yelling and not letting the other person talk, lie, contradict themselves or storm off in a huff.  If you are regularly exposed to this type of behaviour you will learn “not to go there” as it is a futile and embarrassing exercise.  Which is exactly the result that the narcissist wanted.  They will feel like they have “won” the argument.

It is the very lack of substance to what they say and the emptiness of content that epitomises a narcissist.  They can and will say anything without checking themselves or considering the verity or effect of what they are saying.  It is as though they are in a constant state of survival mode so they are shape shifting all of the time and this will happen all day every day.  (We all do this to some extent, but with a narcissist it is extreme).