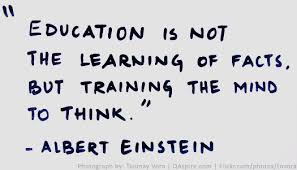 Critical thinking, also called critical analysis, is clear, rational thinking involving critique. Its details vary amongst those who define it. According to Barry K. Beyer (1995), critical thinking means making clear, reasoned judgments. During the process of critical thinking, ideas should be reasoned, well thought out, and judged.[1] The National Council for Excellence in Critical Thinking[2] defines critical thinking as the intellectually disciplined process of actively and skilfully conceptualizing, applying, analysing, synthesizing, and/or evaluating information gathered from, or generated by, observation, experience, reflection, reasoning, or communication, as a guide to belief and action.’

Narcissists are incapable of critical thinking because they are constantly shifting their point of view according to who their audience is.  Because they live in a fantasy world where they are the best, most intelligent and most beautiful, they have to be able to shrug off any data that in any way contradicts their self-image.  This means denying facts, dismissing opinions of others or distorting reality to fit their “reality”.

Being capable of critical thinking is not to be confused with criticism.  Narcissists are highly critical of others they will attack anyone who they do not idolise them for no reason other than the fact that they “need” to feel superior.  They make wild judgements and assumptions about others or situations on very little or no evidence, they will say things like “so and so looks terrible today, so they must be taking drugs/have a hangover”. They will not even consider that that person might have been awake all night with a sick child, have relationship problems, have a parent who is dying or just died.  They will immediately jump to the most negative conclusion possible.

This level of criticism from another would send a narcissist into a complete tail spin.  Even if you say something like “please don’t borrow my stuff again without asking, I find it annoying when I go to look for it and it is not there” you will meet with a number of possible responses such as:

The narcissist will file your objection as criticism and will actively set about getting back at you for daring to suggest that they are anything other than perfect.  This means that you could be subjected to the silent treatment or they could set about constantly putting you down in small and subtle ways or go on a smear campaign against you either way it is abusive behaviour.

After they have insulted you, ignored you, called you every name in the book plus a few they invented to hit on your personal vulnerabilities they will feel much better about themselves, so you should be happy about that for them.  If you stay away from them because of their abusive behaviour you are insulting them.  Their thinking is “I am feeling better after dumping my rage and insecurities in a vile, aggressive and irrational way – we should all now be happy because I am feeling better”.  If you do not present them with a false smile or neutral facade (narcissists are not interested in sincerity), they will go on the offensive again.  In this way the narcissist trains the person who s/he abuses to back down unless they want the argument to go on for longer and the punishments for not backing down to come off side when they are least expected. In other words, constantly walking on eggshells and not defending themselves for the sake of a peaceful life.

A narcissist thinks exclusively in black and white, good or bad.  Since their objective is to have a sparkling image of themselves (for themselves) anything that tarnishes their sparkle is a huge threat because if it is not perfect, then it has to be the opposite, the opposite to perfect is not imperfect it is something much worse like awful, horrible or disgusting.  To be imperfect is to be human and the narcissist finds the very things that make us human such as imperfection, emotion and connectivity completely repugnant.  They have to maintain their own image at all costs which is why they are so selective with the data that they choose to process and their readiness to rewrite history time and again depending on their agenda at any given moment.