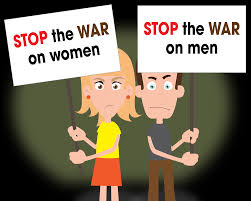 Misogyny (/mɪˈsɒdʒɪni/) is the hatred or dislike of women or girls. Misogyny can be manifested in numerous ways, including sexual discrimination, hostility, male supremacist ideas, belittling of women, violence against women, and sexual objectification of women.[1][2] Misogyny can be found occasionally within ancient texts relating to various mythologies. In addition, various influential Western philosophers and thinkers have been described as misogynistic.[1][3] In 2012 the Macquarie Dictionary (which documents Australian English and New Zealand English) expanded the definition to include not only hatred of women but also “entrenched prejudices against women”.

Misandry (/mɪˈsændri/), from the Greek misos (μῖσος, “hatred”) and anēr, andros (ἀνήρ, gen. ἀνδρός; “man”), is the hatred or dislike of men or boys.[1][2] Misandry can manifest in numerous ways, including sexual discrimination, denigration of men, violence against men, or sexual objectification[3] of men. The word “misandrist” was first used in 1871.

If you were born into a narcissist family of origin, it is quite likely that you will have experienced either misogyny or misandry at some level.  This can come about for several reasons such as the narcissistic mother grew up in a family where females were considered “less than” and so the power within the family dynamic was with the males.  Since narcissists like to affiliate themselves with perceived sources of power, giving males preference over females in some families was “automatic”.

If on the other hand a narcissistic mother was brought up having been treated “less than” by her brothers and her parent(s), she might treat her own male child with disdain and neglect in order to “compensate” for being deprived of opportunities in her own life and/or focusing all of her attention exclusively on her daughter(s) to “make up” for the lack of opportunities and hardship she suffered.

This is a message that you can be given at birth or while still in the womb if the sex of the child is known before birth.  If a narcissistic mother is disappointed by the sex of her child she will not bond with it or mirror it.  She might wear the baby on her hip like an accessory but she will deprive the baby of all emotional nurturing.  One of John Bradshaw’s healing affirmations is “It is okay to be a girl/boy”, it is surprising how strongly that sentence resonates with some people.

If your gender has been a disappointment to your parent(s), they most likely will treat you with contempt and will criticise and humiliate you because you were born the “wrong” sex.

Narcissistic mothers will very often be very jealous and envious of their daughters from a very young age (something that an infant simply cannot understand), especially if she is “daddy’s girl”.  It works the other way too, fathers get envious of their sons if the mother leans on him emotionally to the exclusion of her husband.

The reason that parent(s) will “partner” their own children is because they are very emotionally immature, so it is easier for them to relate to a child who has the same emotional maturity that they have instead of an adult.  Narcissistic parents try to infantilise their children so that they do not out grow them emotionally and because they are easier to control if they haven’t grown up.

If the narcissistic mother wanted female children she can often foster dislike of men in her daughters by acting like she and her daughter are the same age and “best friends” and can often confide in her daughter about the difficulties she might be experiencing in her marriage and talk about her husband in derogatory and demeaning terms.  She does this to try to get reinforcement that she is right about the way she treats males.  It is an over generalisation of the “rule”

Both parents male and female will be in direct competition with their same sex off spring so they will disregard practically everything that that child achieves.  They start to compete when the child is at a very young age and they will not acknowledge anything that the child achieves from a drawing, learning how to ride a bike to getting a degree or Phd.  Nothing is ever good enough for them.  The result of this is that the child will feel invisible, they will have low self-esteem and will probably suffer from anxiety, depression and possibly addiction later on in life