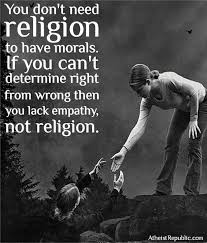 Morality to a narcissist is a code of ethics that they want others to employ when dealing with them.  It is not the same code that they employ when they are dealing with others.  Narcissists believe that they do not have to abide by the same rules as everyone else because they are “superior and above all that”.

Narcissists know that they are amoral and when they get caught committing a minor misdemeanour they will giggle about it like a naughty child who just got caught stealing a biscuit, they think that they are being quite cute/clever.  If they get caught committing adultery, they will flip the blame back on to their partner by implying that it was somehow the partner’s fault that they “needed” to be unfaithful.   If the same thing was done to them they would automatically react with a visceral narcissistic rage.

Narcissists don’t care that they are morally bankrupt because like in all aspects of a narcissists life, they think that they do not need to conform to the ethics that they expect others to adhere to, and especially when they are personally directly involved.  It is their ridiculous sense of entitlement that “permits” them to commit outrageous immoral acts and since they do not have a conscience they do not take responsibility for their own actions or feel any remorse what so ever.  The only “remorse” that they might feel is if they have damaged their public image it will not be because they have treated another person in an abusive and immoral way.

At the same time, they will be outraged by those who do defraud the system for personal gain in the same way that they do. They might be vocally horrified that someone is putting family holidays on their expenses account but they might be committing some far greater crime, but because it is the narcissist, it is perfectly acceptable to them.

The nature of their immoral acts covers the complete range from murder, financial fraud or theft, lying, cheating to abusing their own children and other people.  Frequently they will not react in any way when they get caught and they may even get furious for having their game ruined and try to punish anyone who dares to expose them.