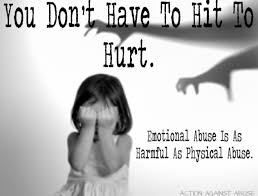 You are unsure of yourself.  Do you find it difficult to make decisions?  Constantly refer to other people for validation or before you do something (when you never did this before?)  The reasons for this are three fold a) the narcissist does not want you “to get ahead” and be successful in whatever you do, as they see this as an injury to their own self-image. B) a narcissist will always blame someone else for everything, if you are in a relationship with a narcissist then you will be the obvious target, c) a person is much easier to control if they are confused and fearful of making the “wrong” decision.  This demeaning and destructive behaviour works slowly and over time you wake up wondering why you have no energy and have completely lost the fight to defend yourself (and maybe even get out of bed).  The narcissist will take absolutely everything away from you that they can.  Your social support network, your money, your confidence and self- esteem.  When they have done this they will be pleased with themselves because in this broken state you are much easier to control and they will see this as a victory.

Confusion is an inevitable by-product of abuse.  You will feel violated and doubt yourself at the same time.  Your reality will constantly be denied and they will not engage in open and frank communication.  If you say that you are not “happy” with the situation, they will go on the offensive and tell you that you are depressed, you are too sensitive, you need to go to therapy or do something, but it is never their fault. They will not work together with you to find a solution/compromise, on the contrary they will work against you.   Any disharmony in the relationship with a narcissist will always be the other person’s fault and they will let you know either directly or indirectly that they are wonderful person for staying with such a crazy person like you.  For example, they might tell someone else that you are being “really tough to tolerate at the moment”, but they will stand by you, even though they know very well that they are the source of your anguish.  This is a double win for them because a) the other person sees them as a loyal and caring partner, b) they get to continue to abuse you, knowing that everyone thinks that they are great, and won’t believe you if you try to set the record straight (you are the one going through mental health issues after all, not them!)

They also believe that they are being magnanimous for pointing out your flaws to you so that you can change and become the better person that they deserve.  They create all of the rules for you, but they are for you alone, they do not abide by any of them.  They have the freedom to do whatever they want to whoever they want even when it means hurting others (including their own children).

Arguing with a narcissist is futile because they will not stick to the argument, they do not argue/discuss to find a solution to a problem, they argue to “win”.  The techniques that they employ to do this are irrelevant to them no matter how nonsensical or illogical they are.

The person on the receiving end of this type of abuse will know instinctively that there is something “wrong”, but might not know what or why.  Most people if they have been accused of a certain type of an annoying or inappropriate behaviour will go off and introspect (even if they are defensive at the time of the argument), a narcissist will not.  They will not listen to what you say and they will firmly place the blame for their behaviour somewhere else, anywhere else, it is just never their “fault”.  This is not just the behaviour of a small child who denies stealing biscuits, it is more pathological than that.  They don’t just deny what they have done, they want to hurt the person who has suggested that they were culpable of a wrong doing, either by a smear campaign, gas lighting or some other means, this is narcissistic abuse and they are relentless in the pursuit for “winning” their “game” (like hurting the person who confronted them, preferably destroy them).  This can literally go on for years.

If you have been subjected to narcissistic abuse either at a family of origin level or in adult relationships it may well be the case that you disassociate from your feelings.  So if someone is overtly shouting abuse at you and you don’t react.  You don’t tell them to F**k Off and you don’t cry or cringe either, you just stand there, speechless, it is only when you get to some place that you feel safe that your emotions emerge.  This might serve you in the short term, but in the long term it has been proven to decrease your ability for healthy psychological interaction and function.  It often happens that the person who is being abused by narcissists exhibits symptoms that the narcissist “should” own, such as anxiety, depression, low self-esteem, suicidal thoughts etc., this is because you are taking on the “stuff” of a narcissist.  You didn’t earn it, they projected it on to you and expect/ insist that you own their negative thoughts about themselves and the world in general.  It is very, very stressful being around a narcissist.