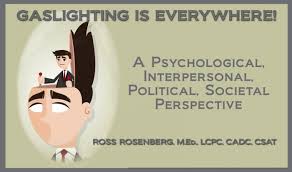 Gas lighting is when an abusive person tries to shift your perception of events so that they can undermine your confidence.  It makes you question yourself (as the narcissist will give their version of events with absolute unwavering certainty) and this uncertainty will make you much easier to manipulate and abuse.

Gas lighting comes in many forms such as moving or taking your things or telling you that they told you something important when they didn’t.  If you confront them on it, they will say things like “it is not my fault you have a bad memory” or “you cannot expect me to be responsible for your things”.

The natural default position of narcissists is to lie about everything.  Even when the truth would have served better.  It is a way that parent(s) create conflict between their children, the way a narcissist will split their friends and colleagues, and will wear down their partner.  They will lie about what other people said and did, what they have done, the intensity of their relationships with various people, compliments that people have paid on brilliant accomplishments etc.  They will lie to justify their actions, lie to deny other actions, lie to protect themselves if they feel that there is even the slightest threat to their perceived unblemished public image.

They are masters in the art of lying, s/he does it with total confidence and completely without shame.  It is for this reason that narcissists pass lie detector tests.  There are no sweaty palms or an increased heart rate as they probably believe their own lies.  If you pick her up on a lie and give a factual version she might say “that is what I said”, so you are wrong again.  If she cannot back out she might say that she “might” have done something but it will be followed by “I have no memory of it” or “that really doesn’t sound like me” or “I wouldn’t do something like that – why would I?”.

They also use your insecurities against you.  They will find out what you are unconfident about listening to you with feign concern and then they will use those very insecurities to bring you down (“Anything that you say can and will be used against you”).  They can do this by saying that someone said something about you like “so and so said that you are really unstable” or “so and so is so interesting” inferring by inflection that you are not.

They will repeat their lies over and over again so that you actually start to believe them, they will also tell the same lie about you to others, so that the people who believe them will treat you “as if” and this will further send their negative lies about you further home.

They will diagnose you with having major issues around trust for example when you question their lies, or for being depressed or paranoid because their abuse it getting to you.  Very often a narcissist will suggest therapy for their victims to sort their issues out, the narcissist will rarely go to therapy, but if they do it is just for show and they will finish after a few sessions saying that their therapist said that there was nothing wrong with them, the fault lies with you.

You start to lie to keep the peace, this is because you feel like you are walking on eggshells with the narcissist because they flip into rage.  The narcissist expects you to live by their rules and any behaviour that you do that they see as not in their favour will make them attack you (they do not have to abide by the same rules, because they are better than you).

After narcissists have got sufficient information to use against you they stop listening to you, because what you want and need is completely irrelevant to them.  So for example they might say “shall we invite six people here for dinner tomorrow?”, if you say “no not tomorrow, I have a long hard day at work” half an hour later they “will say I have invited them and they are all coming” you say “I asked you not to” they will say “well I cannot un-invite them, that would be really rude”.  The narcissist will also then expect you to cook the dinner.  The effect of being constantly ignored is that after a while you stop trying to be heard because what you say or want does not matter to them.

The narcissist will also throw a “bad behaviour” of yours (that might or might not have happened) at you in the middle of an argument to bully you into doing what they want.

Why it is so easy to gaslight a child?

A child’s relationship with their parent is not an equal one.   Children are frequently referred to as hostages to their parents in the literature about dysfunctional parenting.  All of the power is in the hands of the parents and where there is total power there is also the potential for abuse.  Parents not only “rule” the household but they also tell their children (either directly or indirectly) how to interpret the events, people and places that are around them.

This makes gaslighting a child very easy.  Children look to their parents for an understanding of how things work.  From social/relationship situations to using domestic appliances.  For this reason it is easy for a parent to take their vulnerable child and manipulate any given situation to be seen through their own perspective, thus gleaning solidarity from their children, giving the parent control and getting reinforcement of the parent’s perspective from their children (even though they were told what to think).

If a child is feeling unloved, they will do anything to get their parent’s love, if it means denying their understanding of “what just happened” (even if it was a physical action and they saw it with their own eyes), then that is what they will do