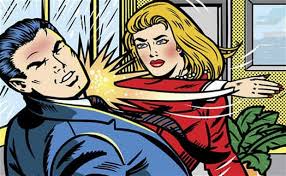 It is reckoned in that one in three abuse victims are males, this figure as quoted in HelpGuide.org strongly contradicts modern stereo types.  It is generally acknowledged that women do abuse males, but the general perception is that the figures are tiny and therefore occurrences are rare and extreme.  This is not the case.

Men are often afraid of being seen as weak and “unmanly” if they look for help for being abused by a woman.  However, the reality is that women tend to abuse men emotionally rather than physically – so there is “nothing to show” for the abuse and is therefore much harder to prove or detect.

The most common ways that a narcissistic female will emotionally abuse are.

None of these behaviours are in any way acceptable but they are not episodes when taken individually would require intervention.  However, their persistence and intensity are very traumatic and can have long lasting effects.

Typically, a man who is being abused at home will look for comfort elsewhere.  This can be:

A man who has been emotionally abused will very often protect her behaviour for a long time after he realises that that is what it is.  The reasons for this might be:

Continuing on with an abusive relationship can manifest itself in both physical and mental illnesses.  If you think that you are being (or have been) in an abusive relationship it is really important to talk to someone who you trust.  It is important to get support from a professional if possible, and make sure that they know what narcissistic abuse is, don’t just ask a therapist if they do, because they will say that they do.  Ask them specific tell-tale questions that will prove that they do.  It is important that you like/trust your therapist and that you feel that they understand and know what you are talking about.  If you choose a therapist and don’t feel comfortable with him/her you are absolutely not obliged to stay with them.  If you cannot find a therapist that fits your needs as it is really important to get support and not to feel that you have to deal with the situation alone.