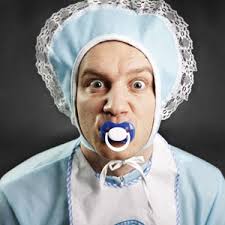 Like toddlers, narcissists tend to have very rapid mood swings, the most notable of these swings is when they fly into a rage over something that most of us would consider a minor issue.  These rages can flare up in an instant and are very intense, however, these feelings tend to be quite short lived which is confusing because for most people if they felt that intensity of anger it could fester for hours or even days.  Not so with a narcissist and the reason for this is that their rage is not genuine anger, it is a controlling mechanism that they employ to get the person that they are raging at to back down.  Most of us when met with that level of anger will back down because you think “well if you feel that strongly about it …”.  You might well be amazed by how the narcissist can go from bright red in the face with rage to quietly getting on with life once they get their way just a moment later.  They will also expect you to behave as if nothing happened too.

Narcissists like toddlers can be very possessive and have difficulty sharing.  A toddler might well have trouble sharing people as well as toys.  So, for example, a toddler might freak out when they realise that they have to share a favourite aunt or uncle with their cousins or have to share their best friend at pre-school.  It is the same for narcissists, they do not like sharing, either people or “stuff”.  They will give stuff away sooner than share it – this is because they don’t like the give and take interaction.  To give for them is a purchase, sharing on the other hand does not have the same leverage.  They will however, take from others relentlessly, because as narcissists, that is their right (sense of entitlement), if they borrow something from someone they do not feel obliged to return the object but will become incensed with rage if someone did the same to them.

The motto of a narcissist it “It’s MINE!!!” just like a toddler.  Learning how to share is a developmental stage that narcissists missed out on, this is very isolating for the narcissist child as they never learnt how to interact and play with other children and that is why they find it so hard to maintain friendships/relationships later on in life.

Emotional and social skills are essential for developing abilities such as paying attention to others, switching from one activity to the next and cooperating with others. The ability to show empathy, express feelings and share generously are not the hallmarks of the narcissistic personality.

Some people do not think that narcissism is genetic is because one of the key components to learning the above skills is to have a role model of appropriate behaviours.  If a child sees a role model sharing, showing gratitude, co-operating and openly expressing feelings they will have a good understanding of how to interact with people outside the immediate family.  Showing respect for children and other members of the family is essential.  A child will observe what is done and take it on board much more than what is said.

This is where narcissistic parents become unstuck.  They may well tell their child how they want them to behave (to make them “look good”), correcting them when they forget to say “please” or “thank you”, doing kind things for other people, but if they are disrespectful to their partner, their own children and or criticise others within earshot of their children, that is what the child will learn.  Children mimic behaviours not words. Which isn’t to say that every child of a narcissistic parent will automatically become a narcissist themselves, that depends on the character of the child, the intensity of the narcissistic parenting and a multitude of external influences, such as supportive relations, teachers and neighbours etc. all contribute.

Healthy parents will reinforce positive social behaviour, this makes the child feel good about themselves and teaches the child the types of behaviour that are worthy of praise.  Helping a child feel good about themselves helps them to develop a sense of empathy for others.  This is because they feel secure enough in themselves to feel other people’s pain, without being over burdened by it.  When a child is brought up in an environment where they are allowed to share their feelings the child will automatically become more generous and thoughtful.   This was not the case with the narcissist, in general narcissists are “afraid” of their feelings and have a tendency to block most of them (with the exception of rage), because feelings for a narcissist are not “safe” and are a sign of weakness, which is why they cannot love, be empathetic, caring or even listen to the feelings of others.  A narcissist will very often block the expression of feeling in others (no matter how mild) with comments such as “well at least”, “nobody died”, “you always” or some other disparaging remark.

Parents can stimulate empathy and emotional intelligence in their children by encouraging them to think about how other people feel, take the perspective of another.  The expression “people will rarely understand what you are feeling unless they have experienced it themselves” is very true.  If a child has been denied access to their own feelings, they will find it almost impossible to know what other people are going through – this carries through to narcissistic adults.

That laughed at therapist’s phrase of “how did that make you feel” is absolutely valid.  Narcissists are so divorced from their feelings that they probably don’t actually know what the question means.  As children we all grew up with things that we were or were not allowed to do.  For example, eat sweets, stay up late or cross a busy road on your own.  However, children of narcissistic parents were not “allowed” or were punished for the expression of their feelings.  This is almost certainly a learnt reaction like those two famous English quotes “stiff upper lip” and “we don’t do feelings” as though that was a virtue.  It is not, it is a denial of the very thing that makes us human.

Teaching and modelling cooperation is a lifelong skill that you will give to your child.  It will make them much more socially adept and will provide them the ability to relate to others.  This in turn will make it easier for them to develop healthy and happy relationships of their own.  As a child learns to develop social problem solving skills they will learn how to deal with conflict or arguments with their peers and will also teach them the concepts of negotiation and compromise.  These are skills that were never developed in a narcissist.