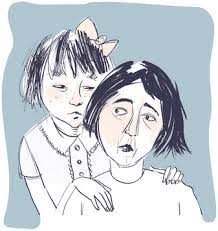 Parentification is where one or both parents depend on their child(ren) to provide them with emotional and mental support.  It is a complete reversal of roles and very damaging for the child because not only does the child not receive any parenting themselves, they are also expected to parent their parents too.  The child never gets the nurturing, comforting and space they need for their own emotional development since they are constantly putting the needs and demands of one or both parents before their own.  The parent may think on a conscious or an unconscious level that they have finally have someone to love them unconditionally and uses the child to fill the feeling of emptiness from not having had loving parents in their own childhood.  Children cannot get away from their parents, so the parent might feel that it is safe for them to depend on their child for “love” possibly for the first time in their life so they will work very hard to keep the child in the role that they have allocated to them, in effect the parent makes the child responsible for their happiness and well-being.  They expect the child to be an unwavering secure source of emotional support, the type of love and support that a narcissist who is parentifying their child expects is not one that two adults would expect from one another because it is too enmeshed, adults do not need unconditional love in partnerships or friendships, so it is completely inappropriate for an adult to expect that level of support from a small child who has not had a healthy or supportive environment to get their own needs met.

The tools that the parent uses to keep their child in the parentified role are fear of abandonment, fear of punishment, fear that if they do not take care of the emotional needs of their parent they, the parent will break-down or fall apart.  The parent will repeatedly tell the child that it is their duty to take care of the parent, that is what children do, so the child responds to this situation by being extremely reactive to their parent’s needs and expectations, frequently trying to anticipate them before the parent does.

The parentified child respond to this dysfunctional system by:

The parentifying model will not exist outside the home, the parent will seem like they are assuming to parental role and will get annoyed with their child if they parent them in public.  Parentified children are not allowed to have a childhood and the parent can get angry with their off spring if they play and act like a child.  The child will not get any validation from their parent because the parent thinks that it is the child’s role to provide them with affirmations, so they will say things like

They will hold their child back whenever and where ever they can (without exposure), so that they child stays focused on the parent(s).  The message that the child gets is that their needs are always too much.  They might put a roof over the child’s head and food on the table, but any more than that is excessive and to show gratitude for the basics that they have been given means that they must dedicate all of their energy to tend to the endless emotional needs of the parent.

Any expression of their needs can be met with abuse, ridicule (for having needs) or outright rejection “just go away!”.

As they grow up they are petrified of doing something that might annihilate their parent, because their parent presents themselves as being extremely fragile and weak.  So that even pointing out the abusive behaviour of the parent will feel like they are being excessively aggressive or unreasonable so they hide their own feelings to protect the parent.

The parent plays the victim causing their child to see themselves as being mean and nasty if they express their own independence.  The parent will also resent the fact that their child wants independence from them and will convey the message that the child has to stay small and quiet in order to survive, not to act like an individual and to always think of the needs of the parent before taking any action.

When the child is ready to separate from the parent, the parent might see this as a replication of their own childhood wounds and act out in anger/rage, name calling and various other methods in an attempt to eviscerate the child into feeling so bad about themselves that they find it very hard to make a clean break.  The parent will continue to look for emotional support from the child even when they do move a way and if anything upsets the parent they will expect their child to drop everything and run to their aid.  This reassurance that they look for can be as a result something real or just a test to see if they can still wield power over their child.

The parentified child must learn that they have been cast in a highly inappropriate role by their parents and to heal from these wounds they have to acknowledge the pain, the lack of parental love and realise that they do not need to sabotage themselves and their ability to thrive to satisfy their parent’s needs.  A child will never be able to satisfy the needs of their parents as a child cannot take the pain away from their parents by bearing it themselves.  The parent has an insatiable appetite for validation, love and approval and unless they do the work for themselves any comfort they receive from their child will be very short lived and they will almost immediately start to look for more.  Parentified children must learn to hand back their parent’s pain as it is not theirs to deal with.