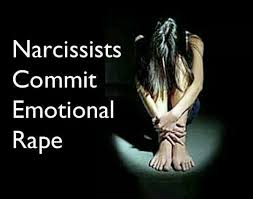 According to Wikipedia rape is:

Rape is a type of sexual assault usually involving sexual intercourse or other forms of sexual penetration perpetrated against a person without that person’s consent. The act may be carried out by physical force, coercion, abuse of authority or against a person who is incapable of giving valid consent, such as one who is unconscious, incapacitated, has an intellectual disability or below the legal age of consent.[1][2][3] The term rape is sometimes used interchangeably with the term sexual assault.[4]

Emotional rape is when a person is emotionally assaulted, where another person has intentionally emotionally perpetrated against a person without that person’s consent.  No one, unless they have experienced it or have studied this type of abuse can realise how severely traumatised the victim will be.   It is an attack on their personality/spirit/soul rather than their body, it is a very misunderstood trauma and often inflicted by primary care givers.  Emotional rape is far more complex than verbal abuse and it is only when we can discuss it openly and candidly that we can help people recover from this sort of despicable abuse.

The narcissist will employ a number of tactics to do this which include:

All of these deceitful bullying actions are done deliberately to destroy the self-esteem and confidence of the other person, emotionally, psychologically, spiritually or physically.  Emotional rape is, in short, an attempt at the systematic destruction of someone’s personality.  To control and dominate for their own personal gain, they enjoy hurting the other person because it makes them feel better about themselves and there may well be financial or some other sort gain in it for the rapist.  The fall out of emotional rape is absolutely savage and the trauma is so severe it can leave you feeling suicidal, feeling completely helpless and that you do not have enough self-esteem or energy to find a way out.

If you feel confused by the behaviour of another person, the likelihood is that you are being abused.  Direct and clear communication does not create confusion or leave you scratching your head wondering about what was just said or why the narcissist reacted so violently to such a benign situation.  Emotional rape’s purpose is to eradicate the self-respect and self-image of another person to leave that person vulnerable to abuse.

Emotional rape sounds very melodramatic, but the reality is that it is every bit as traumatic (if not more so) than sexual assault as it can frequently happen several times a day, day in and day out, year in year out.  The narcissist will literally suck the life out of the person they are abusing.

This is especially traumatic if you come from a narcissist family of origin because you look to your parent(s) for a sense of who you are.  Children are automatically hard wired to trust and to think that their parent(s) have their best interests at heart.  So if they say something bad about you either to you or behind your back you will automatically assume that you need to modify your behaviour to be accepted.  If your parent(s) give out mixed messages that are changed according to who is around, it is very confusing for the child because it is impossible to please the parent(s) as the script keeps changing.

Other tactics that parents use to emotionally rape their child are:

When you consider that you normally stay with your family of origin for at least 16 formative years, that is ample time to brainwash and do considerable emotional damage to a vulnerable child who is dependent on their parent(s) for their survival.

If you have been abused like this in childhood, the likelihood is that you will have very limited boundaries, the result of which is that you might easily be prey to another narcissist in adult life.    Being educated on the subject and listening to your body when it is screaming “NO” about someone, even though they are smothering you with compliments is a way to avoid this potential trap.

It is difficult to get support for having experienced emotional rape because others do not understand the concept.  The predominant question that I have asked throughout my research on narcissism is “Why would anyone even want to do that?” if you discuss the subject with people who have not had the experience of emotional rape they will find it very difficult or simply don’t want to believe you.

So, some of the side effects of emotional rape can be social anxiety, this is when a person experiences overwhelming anxiety in a social setting, especially where there is a large group such as a party.  It can mean that they dread social occasions that most people would consider fun.  They know that they “should” go, but there is no joy or excitement in anticipation of the event.

There are physical symptoms that go with social anxiety too such as blushing, sweating, going weak at the knees, wanting to vomit or just having a knot in your stomach.  There is also a high probability that you will suffer from insomnia, this can go on for days the result of which you are constantly tired and so your judgement is impaired, you tend to over react to stimuli, you cannot concentrate or stay focused and your short term memory becomes really bad.  The physical symptoms just increase the level of social anxiety such as having sweating arm pits and feeling unattractive to others and forgetting social engagements.

Social anxiety, which isn’t the only side effect of emotional rape can also cause low self-esteem and depression.  Frequently to try to reduce the effects of social anxiety people will often take anti-depressants, alcohol and or drugs.  Which begs the question: Aren’t we missing the point when dealing with addiction?  Surely we are (not very effectively) trying to treat the symptom and not the cause, by definition it has to be ineffective.

Emotional rape is a deliberate and systematic attack on another person to undermine and control that person.  The attack is on their personality and not their body.  The attack is on their love of life, self-respect and confidence.  Emotional rape for narcissists takes a lot less energy than sexual rape.  For a narcissist it doesn’t take much energy to fire of diminutive comments day in and day out, it is a relatively “light” way to destroy the other person.

Education is the way forward, but it is also very important to develop a support system, what you think happened to you, probably has happened to you.  Don’t try to explain to people who just don’t understand.  It will frustrate you and they might label you as a bit crazy, you are not, they just haven’t experienced what you have and find it hard to believe (or don’t want to).