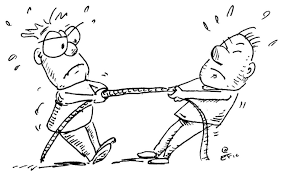 There are several key indicators that your client has been abused by a narcissist.  The first one is that they are frightened of the person that they are trying to separate from.  If they have recently separated from their partner, they will want to do it as quietly as possible to not incur the wrath of their ex.   They have been badly bullied and their self-esteem will be low.  Narcissists are parasitical predators and they will have exploited their partner for the duration of the relationship this will have been emotional/psychological abuse but it can be financial and expecting their partner to do everything for them too.  They will actively target people who will give them a place to live, provide them with financial stability, have good social and business networks, cook and clean for them (or hire someone to do it) and other support activities such as doing all the accounts etc.  They will be furious that these benefits are being withdrawn and will fight to punish your client for having the audacity for denying them what they want (whatever the cost to your client or their children)

The narcissist may sound reasonable, despite the fact that everything s/he says is a lie. This person will do what they can to discredit your client, spread vicious rumours about him/her, attack their reputation, and use whatever means possible to make your client look bad. It doesn’t matter that none of it is true, and since they will do it all behind your clients back you will not know what you are defending him/her against.

The narcissist’s narrative is often believed by otherwise capable and competent professionals such as lawyers, mediators, judges and therapists. Most of us are just not prepared for the magnitude of the lies and the fact that the narcissist is totally indifferent to the emotional, financial and psychological damage that their behaviour has on their children, ex-spouse, family and friends.  The narcissist will usually pepper their lies with half-truths, which makes them all the more credible.

The narcissist is in court to win and the more damage they do the more powerful they feel.  They are not looking for a compromise and have absolutely no negotiation skills or the desire to find a mutually beneficial solution.

They will use manipulation to get what they want when the relationship comes to an end they will do everything in their power to destroy their ex psychologically, socially and financially.  If their destruction has an extreme negative impact on their children, they will consider it to be collateral damage.

They will do this by:

It is important for your client to keep a diary of everything that has happened.  This is for the purpose of keeping the facts right, but also as a reference.  Someone who has been in a relationship with a narcissist has been very abused and may well freeze in a situation where they have to defend themselves or become completely confused, it is important not to project good intention onto the narcissist because there is none.  They will insist that there is, but that is another lie.

The narcissist will have consistently and deliberately isolated your client from any support network, so that they can exercise maximum control.   They will have made your client doubt themselves and their sanity to manipulate to their own advantage.  It will probably take a while to get the true story from your client and they may be reluctant to share everything or even be apologetic for having needs.  This is because they are confused as they will have been shut down on anything that does not suit the narcissists agenda, they may well be embarrassed for letting themselves be pushed around and they will probably be suffering from cognitive dissonance from what they know to be true and the narrative that they have been endlessly fed.

The narcissist will go on a smear campaign and may very well have turned family and friends against your client so that they cannot find reassurance or comfort in others.  Living with a narcissist is so toxic that it has a huge effect on the mental and physical health of your client, to the point where they might well be feeling suicidal.  They may want to give the narcissist what they want just to get away from them as they could be in a life or death situation.  They really are that toxic.  Charming and charismatic to others, but determined to destroy their ex.  The narcissist, because they do not feel many emotions can come across as calm and collected while your client might appear unstable in the eyes of the professionals, this is because they will have endured so much abuse and may well be suffering from CPTSD (Complex post-traumatic stress disorder), this is when a person experiences repeated traumatic events at the hands of an abuser.  It can manifest itself in insomnia, memory loss, exhaustion, difficulty concentrating and very low self-esteem.

Your client has been betrayed by someone they thought they loved and who loved them.  They will be grieving a relationship that they thought was real, but was not.  There is a lot of intense emotional “stuff”’ for a person leaving a narcissist, so they may well appear to be unstable (as the narcissist will have done everything within their power to destabilise them) and will have been messing with their meta-data, which will make them unsure of themselves.

It will be hard to prove what your client says in court as it is the word of your client against your ex’s.  It is really important that your client does not lose his or her cool, as their narcissist ex will be acting like they are trying to win an Oscar.  There are some useful things that can be done: