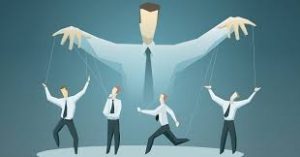 Narcissists use constant manipulation to devalue their victims to the extent that a victim will feel worthless extremely anxious and sometimes suicidal.  The “point” of this manipulation is twofold, to push their victim down so low that they (the narcissist) feels better about themselves, and someone who has been chronically abused will have a damaged spirit and will be much easier to control.  They use threats to cultivate fear, anxiety and despair in their victims and their victims can be anyone who they feel that they can get away with bullying.  This can include their own children, family members, co-workers and friends, they usually do it where they have the “upper hand” such as a parent, an elder sibling a boss or someone like a church leader or person in position of authority.

Manipulation is very hard to understand because they will always imply that you have done something to deserve them being cruel to you but they won’t tell you what it is, that is because there is no reason, they just categorically refuse to take responsibility for their own nasty behaviour.  Their behaviour bares the same scars as physical abuse, except that they are invisible and resonate within a victim’s body in the same way except that in general this type of abuse is not recognised in the same way, not even by many mental health care workers.

A narcissist will manipulate in many different ways but the main ones are:

Narcissistic abusers can attack at any time using sarcasm, name calling, sneering and blame shifting whenever they perceive a threat or are just simply bored and want a bit of “action”.